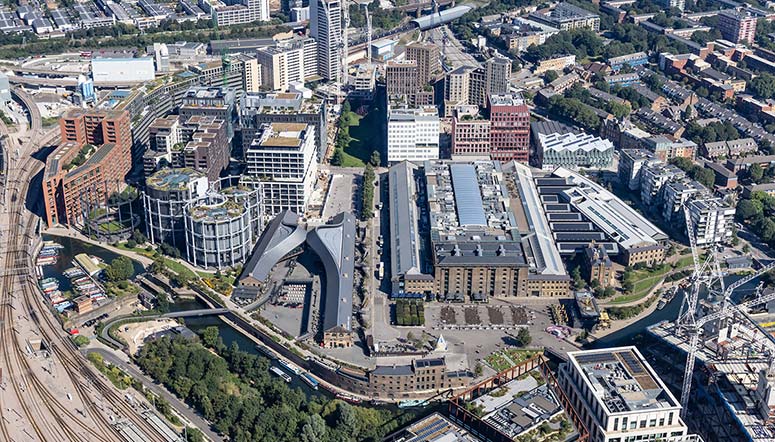 Built environment cancer charity, We Build the Future, has successfully developed and run a pilot project to provide construction workers at London’s King’s Cross with a free-to-attend drop-in clinic where they can meet with a medical practitioner to discuss any medical issues, including issues relating to cancer.

King’s Cross is one of the largest regeneration projects in London, spanning 67 acres of office, retail and leisure space with over 1,700 homes on completion and 27 acres of public space – a mix of parks, streets, squares, and gardens. Construction work started on-site in 2007 and is set to complete in 2024, and the scheme continues to involve many site operatives, contractors, and consultants.

It is estimated that around 12,000 people working in the construction industry will be diagnosed with cancer every year. It has also been recognised that many construction workers do not go to see a doctor as often as they should, which is primarily down to the inability or reluctance to take time off work. This means that early diagnosis can often be missed. To address this, a number of King’s Cross contractors and developers including Argent LLP, BAM, Lendlease, Kier and JRL Midgard have collaborated with We Build the Future and local NHS GPs to bring doctors to site.

We Build the Future’s site surgery pilot held at King’s Cross allowed site operatives the ability to see a doctor at a time that fit-in around their work schedules.

A total of 16 two-hour health clinics were held every Wednesday at an office on York Way with close to 100 patients being seen face-to-face over the six-month duration of the pilot scheme. The surgeries were delivered by the Killick Street Health Centre and led by We Build the Future trustee, Polly Wootton, who gives her time to the charity voluntarily. Polly has worked as a GP partner in a busy inner-city practice for the past 17 years and her practice, located in King’s Cross, covered the cost for a Health Care Assistant and/or receptionist to accompany her during the We Build the Future clinics.

The clinics enabled construction workers the ability to book an appointment or walk in and wait to be seen. The pilot scheme also started to address the barriers for construction workers accessing primary health care, and whether an on-site GP surgery improves their access, and thereby their health.

“Construction workers find it hard to access a General Practice because of working away from home during the week, though I suspect that there may be other reasons such as men being generally reluctant to access health care,” commented Polly. “The attendance at the site surgery is variable, but the cases they present are entirely appropriate for general practice. For example, they are not acute minor injuries but chronic medical issues. There is the opportunity for health advice such as smoking cessation, as well as wider health issues such as sexual health and contraception.”

We Build the Future’s site surgery pilot provided clear evidence of the need and appetite for primary care services amongst the workforce on major development sites in north London. The charity now wants to build on the success of the pilot with Project Open Door, which has the potential to transform attitudes and pathways to primary health care for people working in built environment industries.

We Build the Future works to improve support and advice for people who work in the construction and built environment sector who face the challenge of dealing with cancer in their lives. Helping to fund research, which can help accelerate improvements in the prevention, detection and treatment of cancer, the charity aims to promote health and wellbeing across the industry to help reduce the risk of people developing disease in the first place.

We Build the Future works alongside the world’s biggest cancer charity, Cancer Research UK. Funds raised are shared between research and initiatives, like the site surgery, to support people in construction to access expert information and support.